After achieving critical acclaim in India with her unique blend of Hindi folk and jazz, she’s shedding previous conceptions of her art and embracing moody pop ballads and glittering electronics. For the five songs that comprise “Define Me”, Subhi enlisted a talented cast of producers to build out her heartfelt compositions, infusing them with a late night dance floor energy and widescreen synth flourishes that are sure to have you in your feelings.

Check out the titular song below:

“With this EP release, I feel liberated,” Subhi said. “Being an Indian-American, I have always had this inner conflict of where I belong. For years, I resisted releasing my English songs. This past year I realized that I need to be true to who I am and let the world see me. This EP tells the story of my evolution as an artist and an individual – I finally woke up, got out of my own way, endured rejections and in this process defined who I am.”

After immigrating to the US from India at the age of 16, Subhi found herself working on Wall Street. Unfulfilled and adrift, an internship with Oscar-nominated filmmaker Mira Nair helped her to realize her true passion was to make music, a desire that had been slowly burning since growing up in New Delhi and listening to her grandfather recite his favorite poems every evening. Early on she discovered that her delivery and cadence lent itself to the rhythms of jazz, and teamed up with local musicians in Chicago to make her debut album, “Shaitaan Dil (Naughty Heart),” which was co-presented by The Jazz Institute of Chicago.

Though her blend of storytelling and intricate jazz compositions brought her plenty of accolades, and a growing fan base back in India, her latest foray sees her diving headfirst into the sounds of contemporary American pop. Across her new EP, she investigates her identity as an Indian American, flexing her years of songwriting to make her most moving work yet.

On, June 19, 2017, the Supreme Court of the United States unanimously (8-0) upheld the United States Court of Appeals for the Federal Circuit’s ruling that the all-Asian-American rock band The Slants have the right to register their trademark, ending an eight-year battle in their pursuit to trademark their name.

Photo via The Slants

“After an excruciating legal battle that has spanned nearly eight years, we’re beyond humbled and thrilled to have won this case at the Supreme Court,” the band said in an official statement. “This journey has always been much bigger than our band: it’s been about the rights of all marginalized communities to determine what’s best for ourselves.”

The Portland, Oregon band, consisting of vocalist Ken Shima, guitarist Joe X. Jiang, and founder/bassist Simon Tam (whose stage name is Simon Young), formally applied for a trademark in 2010. However, a trademark examiner rejected the application, stating that “The Slants” was a disparaging term, using sources like UrbanDictionary.com as evidence.

“During the fight, we found the Trademark Office justifying the denial of rights to peope based on their race, religion, sexual orientation, and political views, simply because they disagreed with the message of these groups,” the band said. “To that end, they knowingly used false and misleading information, supported by questionable sources such as UrbanDictionary.com, while placing undue burdens on vulnerable communities and small business owners by forcing them into a lengthy, expensive, and biased appeals process.”

Then in 2011, Tam filed a second application, but was rejected again under Section 2(a) of the Lanham Act.  After numerous appeals and arguments in court, the band finally prevailed on December 22, 2015, with the United States Court of Appeals for the Federal Circuit ruling that The Slants have the right to register their trademark. The Slants stated that people of color and the LGBTQ community have been prime targets under Section 2(a) of the Lanham Act for too long, and their legal battle with the Trademark Office has made it clear that the office needed to open its eyes one day to the modern world and its evolving identity politics, shifting language, and understanding of culture competency.

The day finally came when the appeals court ruled that the U.S Patent and Trademark Office and Department of Justice violated the band’s First Amendment rights. In a 9-3 vote, the appeals court struck down the “disparagement” portion of the Lanham Act, a 1946 law that allowed the Trademark Office to deny marks that could be considered “scandalous, immoral, or disparaging.”

Writing for the opinion, Judge Kimberly Moore stated, “Courts have been slow to appreciate the expressive power of trademarks… Words – even a single word – can be powerful.  Mr. Simon Tam named his band The Slants to make a statement about racial and cultural issues in this country.  With his band name, Mr. Tam conveys more about our society than many volumes of undisputedly protected speech.” 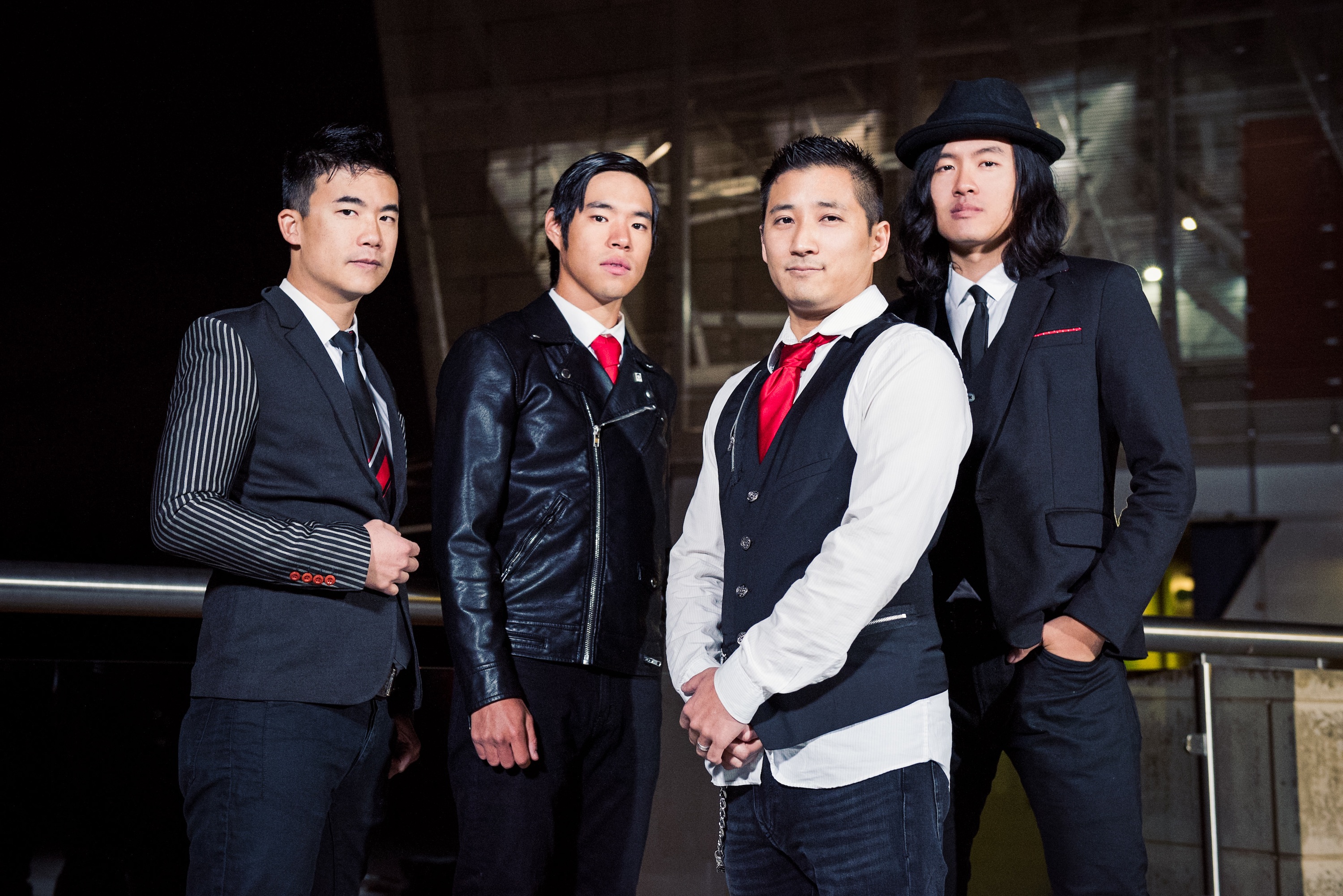 Photo via The Slants

“However, as we continued writing music about our experiences, we realized that activism would be integrated into our art as well,” the band said. “I’m proud our band members have helped raise over $1 million for issues affecting Asian Americans, that we’ve worked with dozens of social justice organizations, and that we could humanize important issues around identity and speech in new and nuanced ways. So, we became part art and part activism.”

Indeed, the Supreme Court’s decision in favor of The Slants’ pursuit to trademark their name has opened new doors that allows Americans to decide who should prevail in the marketplace of ideas, as well as having national implications on free speech. The Slants decided to dedicate their newest release, “The Band Who Must Be Named,” as an open letter to the United States Patent and Trademark Office to articulate these values.

“Music is the best way we know how to drive social change: it overcomes social barriers in a way that mob-mentality and fear-based political rhetoric never can,” the band said. “Language and culture are powerful forms of expression and we are elated to know that the Supreme Court of the United States agree. Irony, wit, satire, parody…these are essential for democracy to thrive, these are weapons that neuter malice.”

The Slants expressed their gratitude and appreciation for all the organizations and groups from all political sides that helped them along the way. The band set out to get their name but wound up accomplishing something far more important: protecting marginalized members of society and protecting the First Amendment.

“The Supreme Court has vindicated First Amendment rights not only for our The Slants, but all Americans who are fighting against paternal government policies that ultimately lead to viewpoint discrimination.”

The Slants is currently touring and promoting their latest release, “The Band Who Must Not Be Named,” which has spawned two singles “From the Heart” and “Level Up.” Here are their upcoming tour dates:

The musical project Topanga was started by Derek Brambles and Eric Johnson, former members of the now-defunct group The King’s English, who decided to name their debut EP “Midnight Jungle” upon Los Angeles after dark. The EP was written in late 2015 and early 2016 about their experiences in the city and includes finishes touches by their friend Mike Malchicoff, who helped engineer Kanye’s “The Life of Pablo.”

Topanga’s influences come from Tame Impala, Kendrick Lamar, Paul McCartney’s “Ram” and David Bowie’s “Hunky Dory.” They have blended various styles to create a sound they can call their own. “American Promises” takes this to the next level and invites the listener to enjoy a pop-infused, bouncy and densely-layered trip through meaningful lyrics about America’s future.

“American Promises” follows the EP’s first single “Shadows,” which is a haunting ballad with uplifting qualities and soulful lyrics about an early childhood memory. Check it out here:

The self-produced six-track “Midnight Jungle” is coming out Feb. 10, so be sure to give it a listen when it drops! To stay up date with Topanga, check them out on their website, Facebook, Twitter, Instagram, Soundcloud, and iTunes.