York-native electronic indie duo Astro Lasso have recently released its debut EP and is now on tour opening for We the Kings in more than 25 cities. Today, Astro Lasso spoke with ETV about the group’s origins, the making of their EP, and their partnership with Big Brothers Big Sisters. 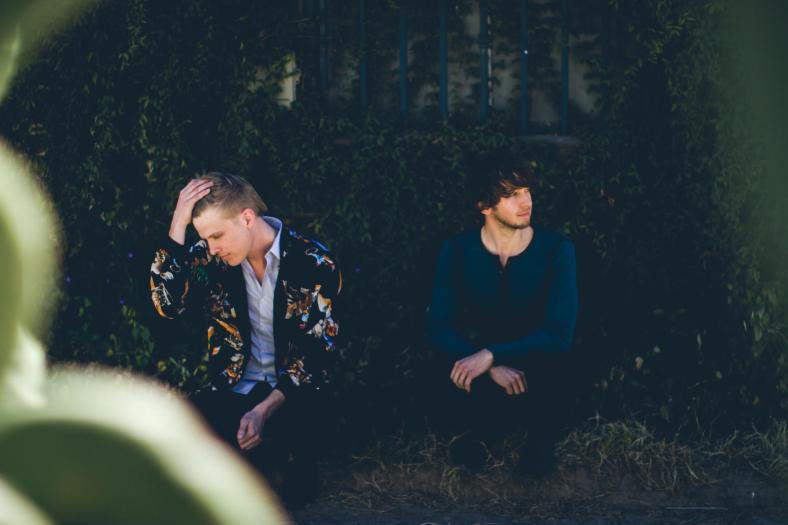 Astro Lasso is made up of Jordan Davis and Tristan Martin who have been making music together since they were kids. They were a part of Kingsfoil, a band that released several albums and opened for the likes of Ed Sheeran, Stone Temple Pilots, Goo Goo Dolls, 21 Pilots, Creed and more. With actor Frankie Muniz filling in for drums and Tim Warren playing bass, the four-piece group were making headlines opening for Third Eye Blind.

“Kingsfoil was an amazing experience but we were ready to push the envelope and do something different as a duo,” Jordan said. “Music and songwriting is a part of our DNA – it’s what we love – it almost feels like Astro Lasso formed us. It just happened and we are really happy it did.”

Together they like to make music that contains many elements that they themselves have hard time describing. Although they like the electronic sounds to be incorporated into their songs, they both love playing instruments and said they would never go away from that. Tristan moved from guitar in Kingsfoil to drums in this project while Jordan sings, plays guitar and keyboards.

Their influences tie in from many areas, including Beach Boys, Red Hot Chili peppers, Ed Sheeran, Moonrise Nation, The Beatles, J Cole and Third Eye Blind, which allows them to try new things. They released their debut EP in January titled “Astro Lasso EP,” which features five songs, including the upbeat, dance-pop track “Someday,” which you can watch here:

“The making of this EP was a blast!” Jordan said. “We recorded, produced and engineered the EP in our home studios. It gives you the freedom to experiment with different ideas and takes on the songs without feeling the time pressure of a bigger studio. We have a few lyrical themes on this record. ‘Stay Safe’ touches on the music industry and the balance you have to have to run the business side of things without losing the inspiration and will be to be creative. ‘The Only Part’ is a love song and ‘Conquer’ tackles the idea of putting out love even in the face of hate or negativity.”

Astro Lasso is currently on a big 25-city plus tour opening for We the Kings across the U.S. The first show was in Nashville on Feb. 17.

“We are so grateful to We the Kings for believing in us and inviting us to be a part of their tour,” Jordan said. “To start the tour and to have first show in Nashville was amazing.  At one point, I admitted to the crowd that we were nervous since it was our first performance as Astro Lasso and they reacted by giving us even more love and support.  Months of work came together and we had so much fun, even if we were a bit anxious at first.  It’s going to be a great tour.”

Although no longer serving as drummer, Frankie Muniz is still active with music by serving as the group’s manager.

“Frankie’s a great manager,” Jordan said. “It might surprise some people but Frankie loves being behind the scenes, he’s a details guy and stresses about making every little thing perfect. We’re really fortunate to have someone with his commitment and work ethic managing Astro Lasso – it’s what he enjoyed most when joined us in Kingsfoil. The bonus is getting to experience all of this with a dear friend, not the mention the fact that he logs the most miles behind the wheel, that’s really awesome!”

The tour continues through March 27 ending in Atlanta. See all the tour dates here.

Astro Lasso has also made the big move in partnering with Big Brothers Big Sisters of America. They will visit local affiliates along the tour route and perform acoustic sets and mentor through music.

“It’s such an honor to be affiliated with Big Brothers Big Sisters of America,” Jordan said. “We both see the importance of mentoring and want to do our part to help the organization recruit more people to be big brothers and big sisters – there are tens of thousands of kids across the country waiting for an adult match.  Music has been so critical in our lives that we thought it would be cool to encourage mentors to make it a part of their relationship with little brothers and sisters.  Whether it’s attending one of our shows, taking guitar lessons, or singing karaoke, music has the power to bring people together and create memories.”

Astro Lasso encourages everyone to visit www.bbbsa.org to learn more about how to make a positive difference in the life of a kid in your community. Along with the “Mentoring through Music” experience with Big Brothers Big Sisters, Frankie, Jordan and Tristan are official celebrity ambassadors, otherwise known as “BIG Champions.”  The three new celebrity ambassadors will join fellow “BIG Champions” Pittsburgh Steeler Antonio Brown, Tampa Bay Buccaneer Laconte David, singer-songwriter LeToya Luckett, singer-songwriter Eric Hutchinson and actor Ryan Potter.

The duo are keeping busy even as they tour with a future that consists of even more shows and more music throughout the year. Astro Lasso are on the rise and ETV looks forward to being with them every step of the way.

“We are so excited to have the project off the ground so we can now focus on creating the best music we could possibly make and keep a steady stream of content coming out the rest of the year!” Jordan said.