The four track EP, produced by John Patterson of The Grates, is the band’s first since 2013’s “Feel.” During the band’s hiatus, frontman Alex Wall released a batch of albums under his sci-fi punk solo project Wax Witches. Upon returning to Australian and coming up with new songs, Wall said the material he wrote instantly felt like Bleeding Knees Club.

“[The song] is about overdoing things that are fun, to the point that it’s not fun at all anymore,” Wall said. “Chewing the gum till there’s no flavour left, and it just tastes gross.”

“Chew the Gum” is fresh and full of attitude, with high potential for becoming an anthem for rebellious teens. The video was filmed and directed by Sonny Costin and shows an intense wrestling battle in the ring between two opponents who are not quite in the same weight class. After being abused badly, all it takes is a stick of gum to revitalize the fallen brawler and defeat his much bigger competitor. The idea for the video came from Wall and stars band members Michael Barker (guitar), Gio Alexander (bass), and Nick Leighton (drums).

“Everyone can relate to wanting to get revenge,” Wall said. “And some can relate to getting pissed on. So, I thought I’d make a clip about a kid getting revenge on a guy that pissed on him. A few years back I met a wrestler who said he’d be keen to be in a video, so the time finally came to take him up on it. I thought it’d be cool if you could hire a wrestler to do your dirty work, and get vengeance for you.”

The band first began as a lo-fi duo in 2010, and after they released their debut album “Nothing To Do,” they quickly became known for their ability to conjure up high octane garage-pop songs similar to The Ramones. Throughout the years, Bleeding Knees Club has played shows worldwide such as UK’s Great Escape Festival and with bands like Wavves, Best Coast, The Vines, Black Lips, OFF! and more.

In addition to releasing a new EP, the band has also announced a national tour with dates in May and June. Support for the shows come from The Pinheads along with a few other special guests. Check out full tour details here: 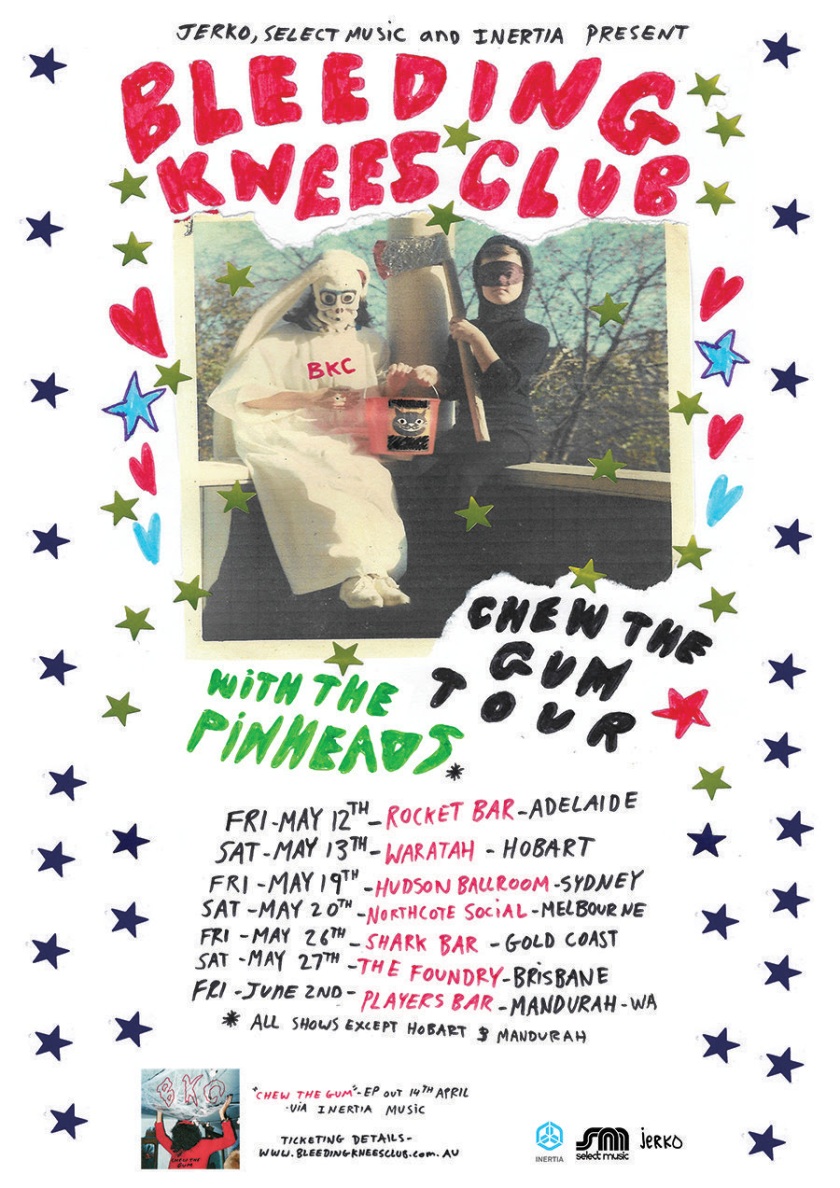 Now that the band is performing live as a 4-piece for the first time, fans new and old should hop aboard to get into the big, punk sound that only Bleeding Knees Club can offer. To stay up to date with all things Bleeding Knees Club, check them out on YouTube, Soundcloud, Facebook, Instagram, Bandcamp, Twitter, and their official site.